It may not have the status of some of its rivals in the ferociously fought-over premium compact SUV segment, but Acura’s RDX is an absolute gamer of a crossover, one that for a few years now has delivered a punchy, positive ride and a high-end interior environment. Plus it looks pretty good from the outside, particularly when decked out with the A-Spec appearance package. What’s not to like, other than that it doesn’t have a silver star, four rings or double-kidney grille on it?

For 2022, there are no major changes for the RDX as it hits mid-cycle, other than some tweaks to the front end that brings the SUV’s looks closer to those of the newly redesigned MDX, its brethren in the Acura lineup. The fog lights down by the bumper are different for this year. Acura also says the Diamond Pentagon front grille design is wider than last year, but unless you take a ruler to each, there’s no way you’re going to notice.

Inside, there are no changes this year to the infotainment system, still accessed on the same 10.2-inch centre screen as before. New for 2022, Wireless Apple CarPlay and Android Auto integration is now standard across the range.

That screen is not touch-operated, by the way, meaning you have to resort to the execrable touch pad found on the bottom portion of the centre console. I hate this system, and the feeling hasn’t mellowed over time. It is just far too easy to choose the wrong option, either because of bumps on the road at the wrong moment or just through sheer finger ineptitude. And while you’re futzing around with it, your eyes are not on the road. Enough said…

Shopicar.com, 100% online, shop for your next car, buy online and get it delivered to you anywhere in Quebec! 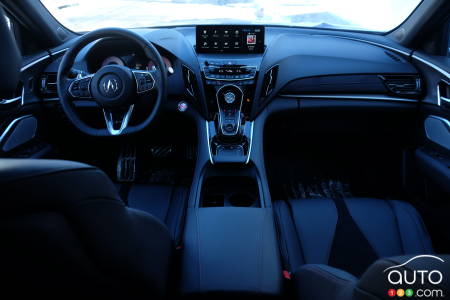 The A-Spec
To be clear, this is strictly an appearance package and will sportify only the SUV’s looks, not its performance. That said, it does its part to jazz up the model nicely, so it’s not an extravagant extra if you want a sharp-looking ride with some added amenities inside. With it come 20-inch five-spoke wheels, exclusive front and rear bumpers, exclusive round dual exhausts, LED fog lights, dark chrome and lighting details, black window trim and of course special badging on the front fender and rear tailgate. Oh, and power-folding side mirrors.

Inside you get ventilated front seats, Ultrasuede and leather-trimmed seat coverings, metal sport pedals and unique plated paddle shifters on the back of a heated, flat-bottom steering wheel, as well as a premium 16-speaker ELS Studio audio system.

Mechanically, buyers of the 2022 RDX have just the one engine available, a 2.0L turbo good for 272 hp and 280 lb-ft of torque, working in combo with a 10-speed auto transmission within an all-wheel-drive configuration. Now, those wanting a powertrain that rivals BMW’s M offerings will have to wait, because this ain’t it. On the other hand, what’s here delivers a supremely positive, even dynamic performance on the road. Steering is pleasingly taut, the transmission does great work and helps deliver strong acceleration off the line and painless passing on the highway, and the SUV is surprisingly nimble when scooting around the city.

If you really want more than what the 2022 RDX delivers with its drive, there’s the rumoured Type S performance variant said to be on the way, but for the moment that’s just a rumour. 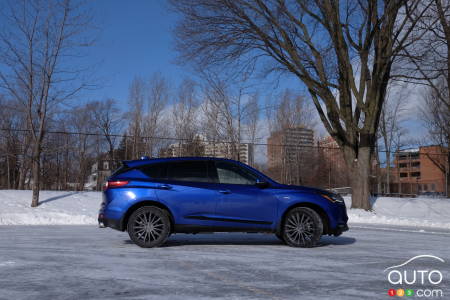 About that AWD: it is of course Acura’s Super Handling All-Wheel Drive system at work here, and in combination with the torque vectoring system it frankly is so effective that, in my week driving the vehicle in the middle of winter (punctuated by the region’s first major snowstorm of the season), I took great joy in a) parking in the biggest piles of snow I could find and b) plowing confidently past others either stuck or gingerly making their way along at snail’s pace. Life is good in those moments…

The RDX’s 20.8 cm of ground clearance is slightly above average for the segment, meaning you can get your spiffy A-Spec’ed RDX nice and dirty off-road if you want, within reason of course.

Inside, the fact that the RDX is slightly longer than some rivals, for instance the BMW X3 and the Volvo XC60, pays dividends in the second row in terms of legroom, and in the trunk in terms of cargo space (835 litres with seats in place, compared to 812 litres for the X3 and 635 for the XC60).

Note that Acura made some changes for 2022 to improve sound dampening, and the result is a quieter ride overall, particularly if you stick with Comfort drive mode. By the way, the choices for drive modes are Comfort, Normal, Snow and Sport, with no Custom mode available for those who want their parameters just so. Normal is, not surprisingly, the sweet spot and the one I suspect most drivers will end up just leaving on by default, the Sport mode not really delivering enough of a difference to justify making the switch. 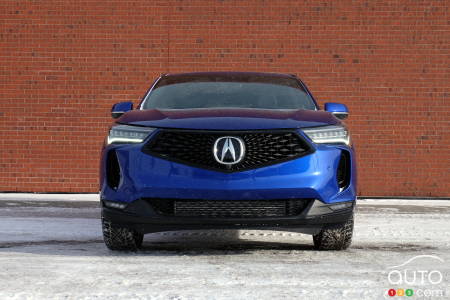 For 2022, the base model RDX comes with an MSRP of $48,175 (not counting transport/prep fees), with the A-Spec variant costing $52,600. Above that, there’s the Platinum Elite with A-Spec package that will set you back $58,000. While I vaunted the value of the A-Spec package above, the base model will do you just fine as well given that it comes well-equipped with a long list of standard equipment and safety systems. Your choice.

Wrap ‘er up
Evil touch pad aside, there’s little to quibble about when it comes to the tweaked 2022 RDX. It’s an overall very solid compact SUV that does a lot well, not least of which the way it rides. Off-the-line acceleration and agility are two particularly strong points.

Driving pleasure did not die with the advent of SUVs, you just have to know where to look. 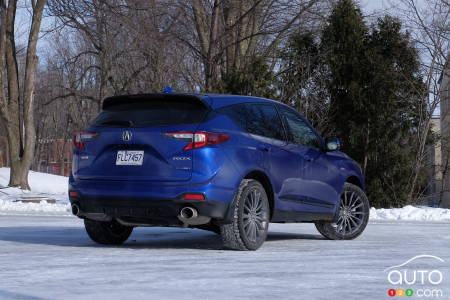 That touch pad, ugh
Multimedia screen is not touch-operated
No buttons for placing/receiving phone calls on the steering wheel
No hybrid options in the model range (and no engine options either for that matter) 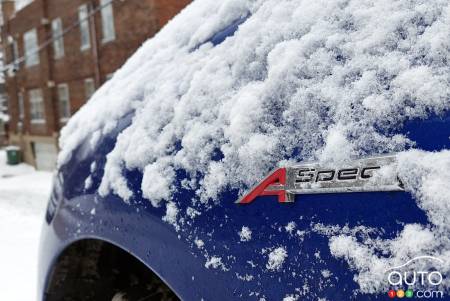 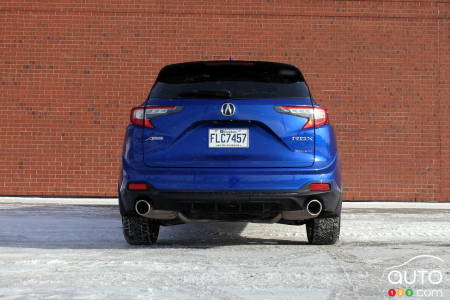