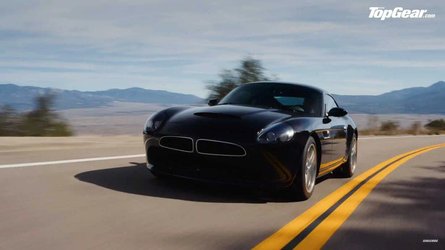 The Z8 is one of BMW’s iconic models from the past 25 years. Its retro-futuristic design echoed the classic 507 from the mid to late ’50s. The Z8 was only made for one generation, spanning four model years from 2000 to 2003. Looking at BMW’s direction, it’s unlikely that the German automaker will be making anything like it again. There were rumors of a revival over a decade ago, but it never came to fruition.

However, that isn’t stopping some companies from making modern interpretations of the roadster. One prime example is the Smit Oletha, and it’s the new Z8 that BMW should make. The Oletha is the product of Willem and Kaess Smit, the founders of Smit Vehicle Engineering (SVE), located in California.

The Smit Oletha isn’t a slightly redesigned Z8 for the 2020s. Instead, it uses the platform of the E86 Z4 Coupe sold from 2006 to 2008. The skin is carbon fiber composites with toughened epoxy prepreg and is autoclave cured. SVE says the Oletha has a curb weight of approximately 3,090 lbs or 1,406 kilograms.

The Z8 design cues are evident in the Oletha prototype. At the front, it has pod-like headlights, a low-slung hood, and a wide horizontal grille. The car’s flanks feature the classic ‘coke-bottle’ beltline that then tapers downwards at the rear. At the back, it has a tail and lights inspired by the Z8, along with a rakish hatch.

As for performance, the Oletha doesn’t use the Z4 or Z4 M’s engine. SVE went for the S65B44 mill from the E92 M3 GTS. Additional upgrades made to the naturally aspirated 4.4-liter V8 include forged internals and individual throttle bodies. The company claims it packs over 450 horsepower (335 kilowatts), up from the standard M3 GTS’ 444 horsepower (331 kilowatts) figure. Purists will be glad to know that the engine shifts with a six-speed manual transmission.

As mentioned, the car is a prototype, and SVE made it clear that it does not manufacture or sell automobiles. The company does restore and modify BMW vehicles of its clients. Of course, it would be great if BMW would give its approval to this car at the very least.