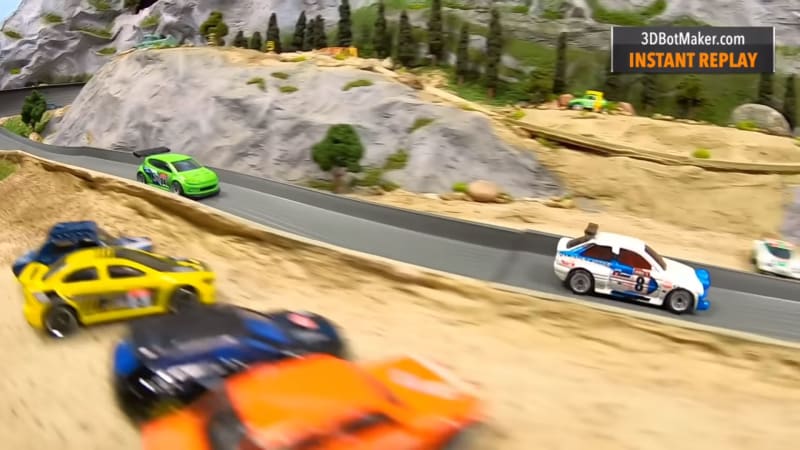 In 2009, a YouTube user called Luxe37 uploaded a stop-motion video called “The Fastest Red & Yellow.” With nothing more than a scale-model Japanese town, scale-model Japanese cars and a Pontiac Trans-Am, a few green men, some magnificent sound design, and what must have been a lot of time, Luxe37 created a splendor. Eleven years later, Luxe37’s landmark lark is still more thrilling and more engrossing than almost every car-centric heist film released since — and TFR&Y doesn’t have any dialogue. Or perhaps TFR&Y is better because of that. Whatever, the point is that it’s been a long time since we’ve been taken with such scale-model fancy, but the 3DBotmaker Diecast Rally Championship pushes all the same buttons, mostly marked “Joy!” and “I Can’t Believe I’m Watching This!”

Jalopnik got tipped to what’s known in fan circles as the DRC, a mostly Hot Wheels and one Tomica multi-round competition flying down a specially built Hot Wheels track with jumps, banked turns, and big air. In case it isn’t clear yet, the DRC is modeled about as close as it can be to the World Rally Championship without drawing the attention of Red Bull’s lederhosen-clad Austrian lawyers (Red Bull owns and broadcasts the WRC). The on-track action through Race Canyon is cracking, the competitors driving a bag of vintage and modern cars from a Lancia Stratos — the one Tomica — to a last-gen Volkswagen Scirocco, all of it covered from multiple angles with multiple cameras. But what makes this series of four vids is the commentary from straight man 3D and color man 2D, who play their roles with superb chemistry, enthusiasm, racing detail, mispronunciations, and questions about the origin of a driver simply called “Jeff.” The are even those cringey commentator dad jokes such as when 2D channels JarJar Binks — who’s driving a 1970 Datsun 510 in the competition — to tell 3D,  “Messa thinksa yousa crazy!”

The DRC gets straight props for sound design, too. We’ve already said too much about it, just go watch all four rounds of this year’s first DRC event. If you’re hungry for more afterward, check out the
ridiculously intense “Marbula ONE” for a nightcap.