The Volkswagen Tiguan, launched in India in 2017, has always been a likeable SUV. Its Germanic looks, high quality interior and pleasant driving experience won it appreciation among a band of premium SUV buyers. For 2020, the Tiguan we’re familiar with makes way for the Tiguan Allspace you see here. You can think of the Allspace as an XL-sized Tiguan; its 110mm longer in its wheelbase and 215mm longer overall. The added length has allowed the all-important inclusion of a third row of seats, and the promise is of a Tiguan with wider appeal.

However, there is a catch. Where the Tiguan ran on diesel, the fuel of choice for Indian SUV buyers, the Allspace has been launched as a petrol-only model. Question is, how does the package come together?

At first glance, the Tiguan Allspace doesn’t look all too different to the standard Tiguan. The squared-out front end is unchanged and the only real point of difference up front is the absence of cladding lower down. It’s in profile that the Allspace looks like the stretched Tiguan that it is. The larger cabin section and longer rear overhang mean the proportions aren’t quite as appealing as the taut Tiguan, though the design is still neat and clean. The tail end is also similar to what we’ve seen before with the addition of chrome surrounds for the faux exhausts.

If you’ve been in a Tiguan, you’ll find yourself in familiar surroundings in the Tiguan Allspace. And the first thing of note, as before, is the level of quality. The reassuring thunk on door shut, the generous use of soft touch materials and the long-lasting feel to even the smallest buttons makes you feel your money has gone a long way. Sure, the all-black theme makes things look a bit drab and even the dashboard doesn’t look cutting-edge today but it is thoughtfully designed and puts all controls within easy reach. A small but important upgrade on the Allspace is the incorporation of an Audi-like digital instrument cluster. The readout is crisp and clear and gives the option to toggle between layouts. You don’t sit all that high up (as SUVs go) but the large windscreen and big glasshouse still equals a great view out. Drivers and their co-drivers will also like the large front seats for comfort. 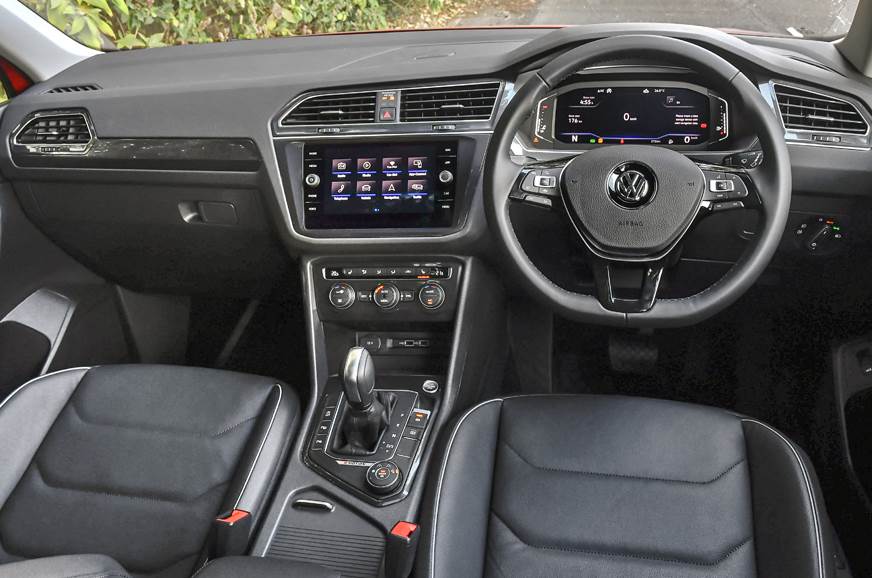 The middle row experience is rather nice too. The seats are supportive, there’s loads of legroom (with the seats slid back, that is) and you even have the option to adjust backrest angle albeit via flimsy tags. There’s enough room for a middle passenger too though the seat is best for two. Fold-out trays for the rear seats and a 12V charging socket at the back are handy inclusions but sun screens for the large rear windows are missed. 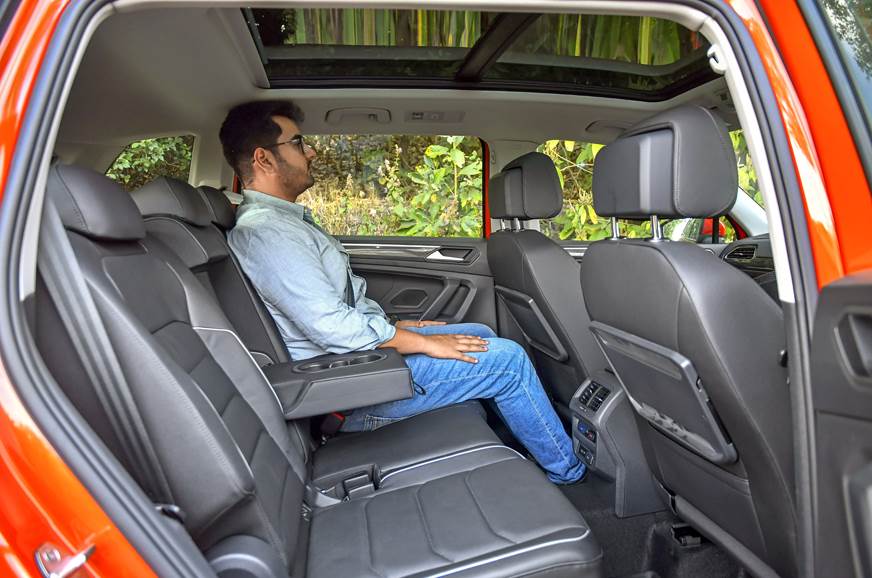 And what of the third row? Well, the news isn’t great. Access to the third row via the rear doors requires some twisting and turning, and once inside you’ll find space is strictly limited. You’ll need to be a great negotiator to work out a kneeroom compromise with the middle row passengers, and headroom is also tight for anyone taller than average height. The third row is fine for children and perhaps adults on the occasional intra-city jaunt but no more. The 50:50 split third row is best left folded down, and doing so increases the Allspace’s reasonable 230 litre luggage space (with all seats up) to 700 litres. You can additionally fold the middle row seats to free up cargo van levels of room. 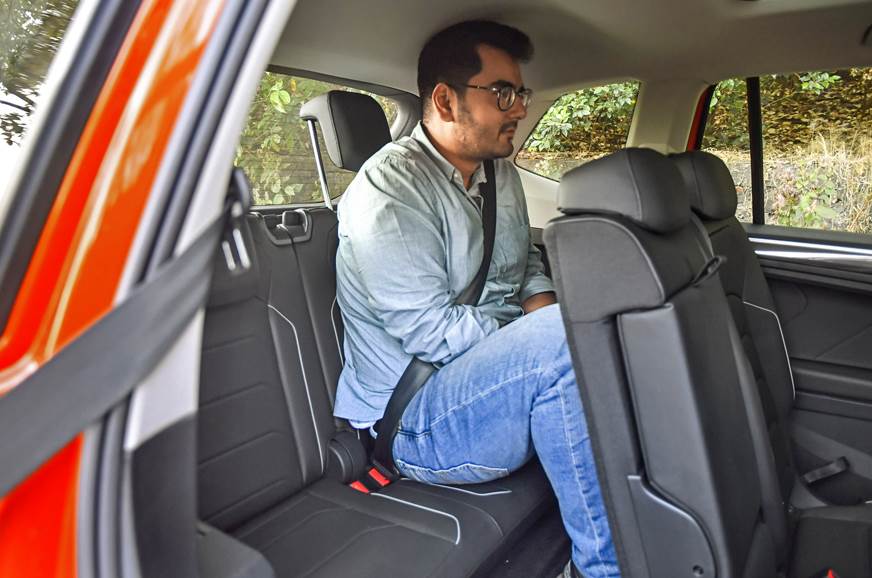 What features does it get?

The Tiguan Allspace is on sale in one fully-loaded variant, and the feature list is quite long. Safety kit comprises 7 airbags, ESC and ASR (anti-slip regulation), while front and rear parking sensors and LED headlights with dynamic cornering function are also standard fit. Comfort features of interest include a full length panoramic sunroof, three-zone climate control, leather upholstery, powered driver’s seat with memory, powered boot lid and park assist. Digital dials are part of the package and the Allspace also gets a slick 8.0-inch touchscreen infotainment system with Android Auto, Apple CarPlay and Mirrorlink support. 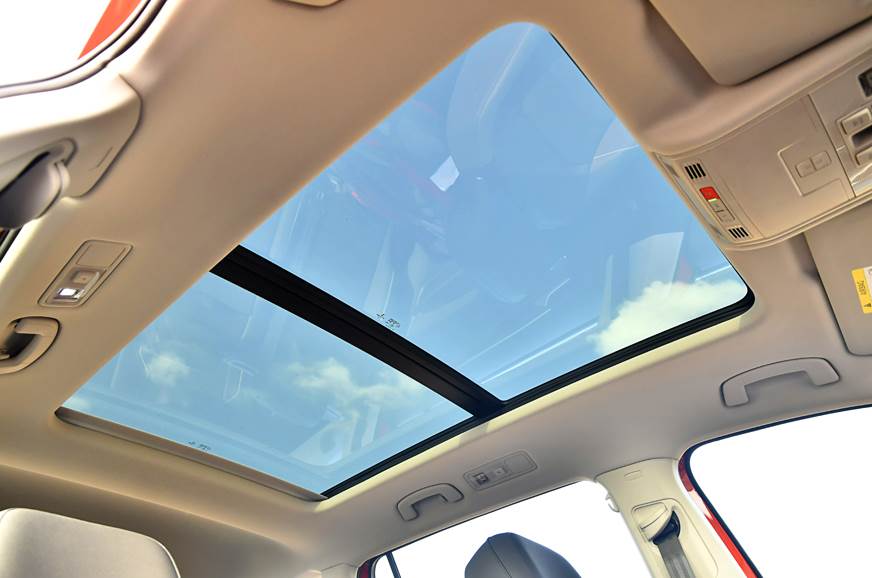 The Tiguan Allspace comes powered by a 2.0-litre turbocharged, direct-injection TSI petrol engine. Headline numbers include a power output of 190hp at 4200rpm and max torque of 320Nm at 1500-4100rpm. The power is channeled to all four wheels via a seven-speed dual-clutch transmission.

Drivers used to diesel SUVs might miss that ready low-end pulling power here but nonetheless progress is brisk. Things get better as you press down on the accelerator with the engine coming into its element above 2000rpm. Like all TSI engines, the Allspace’s 2.0 unit feels its best in the mid-range with a thick swathe of torque at your disposal. Power comes in strong making overtakings a non-event. Of course, the quick shifting gearbox chips in by keeping the engine in the meat of the powerband. Press on, and there’s even fun to be had extending the engine to 6000rpm. Drive modes help alter the experience but you get most out of the powertrain in its Sport setting. Paddleshifters and manual shifts via the gear lever also add in a nice degree of driver involvement. 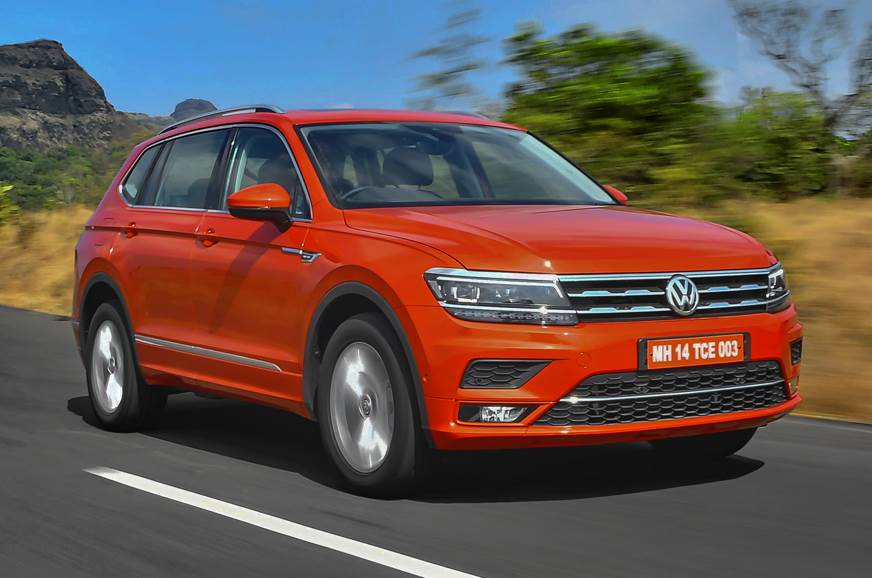 Of the other things, the Tigaun Allspace’s petrol engine is smooth but doesn’t quite set the bar for refinement sounding a bit gravelly at middle revs.

Handling is neutral with good grip at all times but the Allspace is not as quick or keen to turn as the smaller Tiguan. The steering also feels too inert to really involve you in the proceedings. You can add weight to the steering via the car settings on the touchscreen but even so that connect is missing which is a shame given how willing the engine is.

The Allspace rides like a typical European car. That is a polite way to say that the suspension can’t quite filter out the worst of our roads with a firm edge at low speeds. On the plus side, high speed stability is really good making the Tiguan Allspace a competent highway cruiser.

Like the standard Tiguan, the Allspace also gets off-road modes selectable via a dial that control engine, steering, AWD and electronics settings. Hill descent control is also included.

Should you buy one?

Priced at Rs 33.12 lakh (ex-showroom, India), the Allspace is about Rs 2 lakh pricier than the outgoing Tiguan TDI Highline. Like the Tiguan, the Allspace is not an SUV for everyone. It’s not the largest of SUVs for the money, nor is it the best seven seater around. The absence of a diesel engine option on the Allspace is sure to be a red flag for many too.

Yet the Allspace is an SUV that’s hard to gloss over. The depth of engineering, the made-in-Wolfsburg build and the borderline exciting engine are things that have their appeal to discerning buyers. If you are one, act fast because the Tiguan Allspace is being brought to India only as a limited-run import.