The post-budget television discussions this year had one interesting departure from the previous ones – most news channels did not have any prominent member from the Indian automobile industry sharing his / her analysis and reaction! For an industry that contributes close to 8% of national GDP and 35% of manufacturing GDP this was a telling moment.

Though automotive news portals and platforms did carry out “dissection sessions” over the following couple of days, there was not one word of concern or disappointment from the analysts, be it the industry body or individual automakers. Everyone was intent on congratulating the government for a “growth-oriented” budget! There were very few press articles raising concern on the complete neglect of demand-drivers at the cost of supply-stimuli.

While we sing paeans about PM Gatishakti and the dawning of Amrit Kaal, we need a reality check that we are fussing around with long-term initiatives. These will build the nation over the next 25 years. Having lost close to 20 million jobs, we are looking at adding 6 million over the next 5 years.

This is just like a patient with co-morbidities coming into a hospital with very low oxygen saturation due to Covid. This patient needs to get into the ICU right away and be put on a ventilator. The oxygen level needs to stabilise, first and foremost. Instead, you put the patient under prolonged observation debating which co-morbidity to tackle first.

The industry needs to call a spade a spade. Instead, it decides to call it a shovel. It has built a narrative on its current state of health which is inexplicably optimistic and effervescent. There are just a few stray voices of concern and anxiety. While one can appreciate that the morale of the supply chain and the network need to be kept positive, it is definitely prudent to bring them early into the reality-check rather than give them shocks at a later stage. The two external stakeholders are the customers and media. Neither get waylaid by the narrative.

Let us do a reality check and bring the contradictions to the fore.

The drop in 2020 saw sales numbers go back to 2010 levels for four wheelers, two wheelers and commercial vehicles. The reason has been the loss of jobs, salaries, and purchase power. The lockdowns did not lead to low numbers. The negative consumer sentiments did. If the lockdowns were the actual reason, then the industry should have made up the losses as they were lifted. They were never covered as a rising inflation and a lowering sentiment dealt a terrible blow to the backbone of aspiration to own a new vehicle.

If one were to assess the actual opportunity lost over the last two years, it is more than simply going back to 2018 numbers.

If business were as usual and there was no pandemic, the two-wheeler industry would have grown by at least 4.85% in 2019-20 and 2020-21. This means 4.7 million more units and 8.1 million more units in the respective years. Hence, going back to 2018-19 numbers is not the right parameter to calculate the opportunity loss. The industry sold 15.11 million two-wheelers against a potential of 23.28 million. Over two years we have lost close to 13 million in potential.

Similarly, here is the opportunity loss for four-wheelers.

The industry has seen an opportunity loss of 1.5 million units and going back to 2018-19 numbers will not be the right perspective.

The task of revival is tougher than projected.

The pipeline is ruptured! 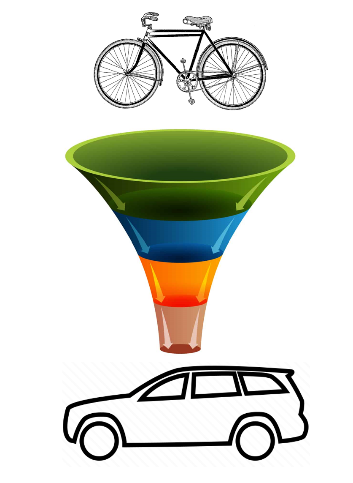 Description automatically generatedIn a country like ours where vehicle penetration is still very low, a healthy consumer pipeline is central to market growth. It is just like the ‘conversion funnel’ of an individual company wherein one needs a large number of ‘leads’ to convince and convert into buyers. It starts from the bicycle and finally ends at luxury cars.

We have roughly 200 million people walking up to 10 kms to work every day.

We have around 110 million bicyclists.

While motorised transport has grown by 8%-10% over the past 20 years, bicycles have grown by only 3%. If the latter were to grow at the same rate as their richer cousins, we would have close to 300 million more bicyclists!

The data of the last two financial years is a telling statement on the lopsided economic growth we have been experiencing over the past two decades. Typically, the bicycles should be the highest number acting as natural leads for two-wheelers and finally for four-wheelers. That is the sustainable development model for any emerging economy. The funnel for India is faulty. It is as if an individual would directly go into owning a two-wheeler skipping the stage of bicycle ownership. That happens only in highly developed markets and not in one like ours. Here, millions of bicycle owners have to form the foundation of an individual wanting to upgrade to better means of mobility over one’s lifetime.

Let us look at the top 10 selling four-wheelers in January 2022 (wholesales). 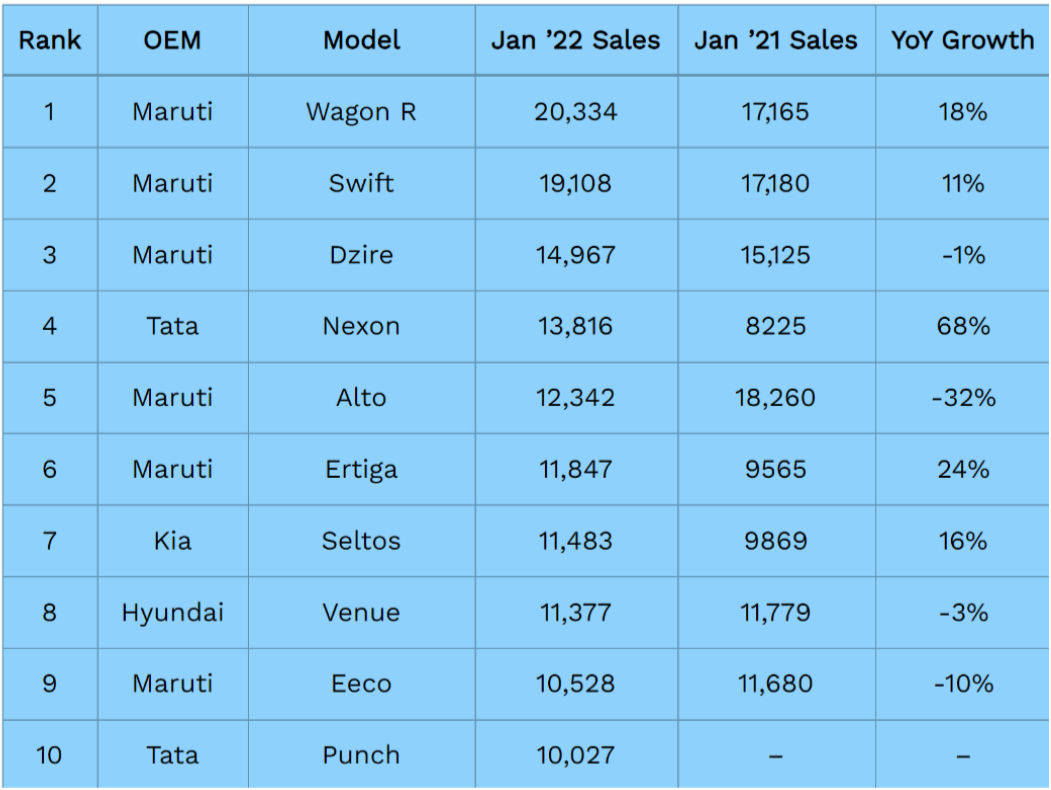 An entry-level vehicle like the Alto stands at #5 while the likes of S-Presso and Kwid do not even feature! This means that the preent vehicle owners are buying the new ones, either as replacement or as an additional one. Basically, the rich are getting richer and spending on new vehicles. The two-wheeler owner is staying away from a new vehicle purchase or might go for a used one at the best.

The industry is operating at 60% capacity for two-wheelers and 40% for four-wheelers. What was once touted as a strength for an ever-expending market will soon become a millstone as the unused capacity of manufacturing ICE vehicles will soon be rendered obsolete! Not only will the industry have to invest in new assembly lines for electric and hydrogen vehicles, it will also have to write-off huge investments and layoff a substantial part of its workforce.

If the pipeline of bookings is full why does the industry talk lowering of GST rates on the automobile? If the lack of chips is the only obstacle holding sales back, why are two-wheeler sales still depressed as they use far less chips than their bigger brethren?

These are two things the industry wants to stay away from as a collective. Individual automakers do sensitivity and sentiment analyses as integral to business operations for furthering their own brands. The moment it comes to working together to undertake the same exercises for the industry as a whole, they suffer selective amnesia. And then they feel it below their dignity to work hand in hand with the bicycle and tractor industries to identify correlations and cause-effects.

The industry should have presented a thorough sensitivity analysis to the policy makers on the positive impact of GST rationalisation on demand revival and the entire ecosystem getting into a higher gear. When you directly and indirectly engage 30 million Indians, any positive vibe will have massive ripple effects all through the economy.

The industry should have conducted regular sentiment analyses over the past 24 months and used the same to craft better demand-side stimuli. Industry bodies like FICCI and CII have been doing so periodically. I have not seen any from SIAM, as yet, unless they keep these reports as secret. I had a recent brush with a very senior policy maker who heads a “think tank” where he questioned the very need to do any form of consumer research. His logic was that the consumer “does not know anything, so why bother?”

The situation today is due to what was planned 24 months ago. The situation in 2024 will be an outcome of what is being planned today by the industry. If it decides to depend on the directions of the policy maker, it will remain a ‘slave’, operating on whims and fancies of people with inflated egos and insulated lives. If it has to live its own life, commensurate to the stature it deserves, then it has to set its own agenda right now.

I have stated previously on this very platform that the Indian automotive industry has to basically walk alone and chart its own path. It has to assert itself before the policy makers and judiciary in establishing basic credibility of thinking the best for the nation. Size does not guarantee stature!

I am reminded of a famous Lata Mangeshkar song from the Hindi film Silsila titled “Yeh kahaan aa gaye hum!” (Where have we arrived!) that starts with a recitation in Amitabh Bachchan’s baritone…

[My solitude and I frequently talk to each other
A lot would have happened if you were here!]

Relaxing of COVID-19 restrictions, growing demand for electric vehicles and growth in exports are some of the near- term positive factors for the auto sector. However, a return to the path of normalcy and striking a balance between demand and supply appear to be long away.